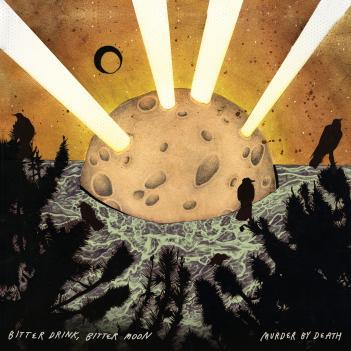 My Hill
Lost River
Straight at the Sun
No Oath, No Spell
I Came Around
Hard World
Ditch Lilly
The Curse of Elkhart
Ramblin’
Queen Mab
Go to the Light
Oh To Be An Animal
Ghost Fields

Murder By Death wrote Bitter Drink, Bitter Moon – their first album featuring contributions from Brackett (formerly of Okkervil River and Shearwater)– throughout most of 2011, testing and reworking the songs in Turla’s basement-turned-practice-space. In January, they traveled to Dallas, TX to record with producer John Congleton (Explosions In The Sky, St. Vincent, Black Mountain) over three weeks.

Beginning July 12th, Murder By Death will head out on a North American headlining tour that continues through August 25th. The tour includes a July 17th show at Webster Hall in New York and an August 3rd show at the El Rey Theatre in Los Angeles, as well as two-night stands at the Bottom of the Hill in San Francisco on August 4th and 5th and at the Bluebird Theater in Denver on August 16th and 18th. This summer also marks the 10th anniversary of the release of Like The Exorcist, But More Breakdancing, the band’s first LP, and in celebration they will be playing rarely performed tracks from the album throughout the summer tour, in addition to previewing songs from Bitter Drink, Bitter Moon.